By Conn ConnollySeptember 13, 2017BE SOCIAL, Uncategorized
No Comments

Now that the current 2017 Ireland golf vacation season is beginning to wind down, we look at some key developments and highlights to consider in advance of a 2018 Ireland Golf Vacation.

Hogs Head is the name of a new course being built just at the south end of Waterville village on the former site of Skelligs Bay golf club. However this is not a makeover but rather a completely new course with no expense being spared. Backed by wealthy New York executives, it is rumored that more than $50 million is being spent on Hogs Head under the watchful eye of Robert Trent Jones Junior. While the site is not natural links terrain, over 100,000 tonnes of sand-topping has taken place at the location. This combined with the fescue grasses extensively planted and the winds of Ballinskelligs Bay should ensure Hogs Head plays like a links.  Slated for a ‘soft’ opening in late 2017, it should be ready for the visiting golfer in 2018. It’s opening should provide a major boost for the Waterville region. While Waterville Golf Links is a very popular course for the golf tourist, traditionally golfers tend to come in and out in the same day and usually prefer staying in the more central and bustling town of Killarney. For your 2018 Ireland golf vacation, the addition of another top links-style course in Waterville, visiting golfers should consider bedding down in Waterville for a night or two.

Golf in Ballyliffin is definitely not new! We loved this tidbit on the Ballyliffin Golf Club website. “Golf was played in the region in the 1920s and 1930s by Carndonagh Bankers and others who could afford the time”. Little has changed in 100 years indeed! Real Irish Golf has long regarded Ballyliffin as the finest 36 holes of true Links golf in Ireland, Unfortunately up to now, it is a location that does not get its due merit given its relatively remote location on the Inishowen peninsula. This ‘secret’ will be truly unveiled in 2018 with the 2018 Dubai Duty Free Open being played on the Glashedy Links in Ballyliffin. Opened in 1993, the course was designed by Tom Craddock and Pat Ruddy. They described it as “probably the finest piece of links golfing terrain that they had ever seen”. That’s something coming from Ruddy, Ireland’s greatest living Links architect and owner of The famed European Club. The Glashedy Links will have its coming out party in 2018. For your 2018 Ireland Golf Vacation., consider going to the North West of Ireland; Rory recommends it! 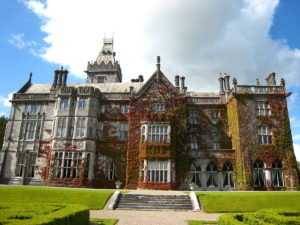 With ambitions of bringing the Ryder Cup back to Ireland in 2026 ~ 20 years after its staging at the K Club in 2006, JP McManus is sparing no expense on his current redesign of Adare Manor.  Every tee box, every green and every bunker is being re-built. The greens will be the first in Ireland to feature sub-air technology on all putting sites.  All of this will not come cheap if you want to play it on your 2018 Ireland Golf Vacation. Green fees at the new Adare Manor will be almost €400, outstripping Royal Portrush, host of the 2019 Open Championship and Royal County Down, the Golf Digest ranked #1 course in the World. It remains to be seen if visitors are willing to pay this level of fees for a parkland course in a traditional Links course destination. A call to those aforementioned Carndonagh bankers may be in order!

The Open Championship at Royal Portrush

No we are not confused and we do know that the Open Championship will be held at Carnoustie in 2018! However with Royal Portrush hosting the British Open the following year in 2019, the PR machine will be in full swing during next year’s event to promote Royal Portrush. On the back of Golf Digest ranking Royal County Down as its top golf course in the World, Northern Ireland has become a bucket-list golf destination for many avid golfers. With Royal Portrush appearing more prominently on the horizon in 2018, many golfers are indeed more likely to “Discover Northern Ireland” on their 2018 Ireland Golf Vacation. 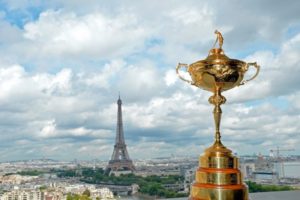 No Ireland has not invaded France! However, with the Ryder Cup returning to the European shores in 2018, it is likely that many American golfers will target these shores for their 2018 Ireland Golf Vacation en route to Le Golf National.  The 2018 Ryder Cup matches matches will take place from Friday September 28th through Sunday September 30th. Paris. With Paris a short and cheap flight from Ireland, the second half of September is likely to be a busy time for Ireland Golf trips. Early bookings will be required to secure tee times on Ireland’s top golf courses, such as Royal County Down, Royal Portrush, Ballybunion and The Old Head.